April 7, 2016 Sports Comments Off on Queens defeat Tunisia 2-1 in a great comeback 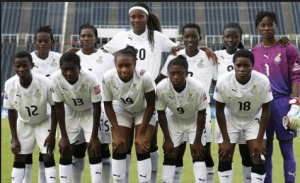 Ghana’s Black Queens came down from a goal to beat Tunisia 2-1 in their African Women’s Championships final round qualifier in Tunis, Tunisia.

The Tunisians, took the lead from a penalty on the 33rd minute, after Senegalese referee Fatou Thione judged Janet Egyir to have fouled a Tunisian striker in the box, punishing Egyir with a yellow card and rewarding the Tunisians with a spot-kick converted by Ella Kabaachi.

Queens equalised immediately on resumption of the second half with Samira Suleman, finishing a brilliant free kick and Priscilla  Adubea of Techiman-based Ampem Darkoa Ladies, scoring the winner with about six minutes to go.

The Queens, almost suffered from the referee’s controversial decisions, as she judged goalkeeper Patricia Mantey to have pulled down a Tunisian player in the box.

Mantey was sent off and again awarded penalty to Tunisia, but substitute goalkeeper Nana Ama Asantewaa showed her bravery as she parried the shot off to deny the Tunisians a second goal.

Queens played a greater part of the game with ten women, but still managed to win.