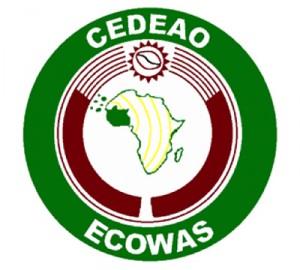 The Africa Regional Integration Index Report launched recently in Addis Ababa, is the result of a collaboration between the UN Economic Commission for Africa (ECA), the African Development Bank (AfDB) and the African Union Commission (AUC); and follows calls for systematic measurement of regional integration.

The Arab Maghreb Union (UMA) came fourth with 0.459, followed by the Intergovernmental Authority on Development (IGAD) in the horn and its western area, with 0.457; and the Economic Community of Central African States (ECCAS) in sixth, scoring 0.454. 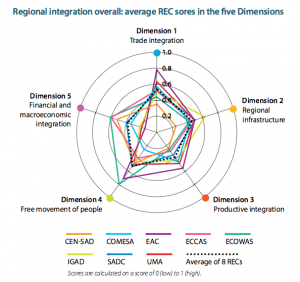 The joint research also examined integration in two wider regional blocs: the Common Market for Eastern and Southern Africa (COMESA), which cuts across North-Eastern, East, Central and Southern Africa, and includes some member countries of the UMA, IGAD, ECCAS and SADC; and the Community of Sahel Saharan States (CEN-SAD) made up of ECOWAS and some North, Central and East African states (from UMA, ECCAS and IGAD).

The ECOWAS regional economic community had the highest score in the free movement of people (0.800) and in financial and macroeconomic integration (0.611) but fared poorly in the others, ranking 7th in trade integration (0.442), regional infrastructure (0.442), and productive integration (0.265).

In the ECOWAS, Côte d’Ivoire, Togo and Senegal were the best performing countries in achieving regional integration.

The report’s analysis shows that across the eight economic communities in Africa, the average score is 0.470, which is less than half of the 0-1 scale, showing that there is still significant room for progress.

In her comments on the report, the AUC Commissioner for Trade and Industry, Fatima Haram Acyl, was quoted as saying: “Through the Index, the AUC, AfDB and ECA are bringing the continent’s integration goals within closer reach. Findings show that while progress is being made with 28 top performing countries across the eight Regional Economic Communities, average integration scores stand at below half of the scale. It is time for Africa to build on this and drive regional integration ever further forward.”

Why Washington may force TikTok’s Chinese owner to sell