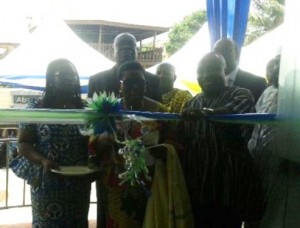 The five-storey building with spacious offices is expected to be leased out to corporate bodies and organizations.

Construction work on the project, which was financed internally, that is by the interest on loans and returns on investments, started on July 2012 and was completed in September 2015.

Mr Wellington Ansah, Manager, CAGECCU, said despite the challenges of low income, by dint of hard work, determination and total support from all members of CAGECCU, the dream of the Union becoming a workers’ bank has materialised.

According to Mr Ansah, CAGECCU, established in 1988 had grown to become a big tree, providing economic and social shelter for more than six thousand members now.

“Today, we have this magnificent building as our office complex, but in those days, we held our meetings in the old canteen while financial businesses were transacted in the office of the treasurer, who exhibited a great deal of honesty and credibility.

“It is evident that credit unions create a reliable source of funds for customers and members,” he said.

The Manager of CAGECCU assured members of CAGECCU and the public that their savings and contributions would be very safe with CAGECCU adding that, “By saving with us you are guaranteed easy access to loans with very flexible terms and conditions.

“We will not relent in our efforts to offer you improved services in the coming years,” he said.

Madam Grace Adzroe, Controller and Accountant General, lauded members of CAGECCU for their achievement and commended the efforts of the executives.

She urged CAGECCU to improve the security and quality service of their hire purchase.

Madam Adzroe also called on members of the union to automate their system from manual to a manner that would allow members to have access to their statements online.

She said since the membership of the credit union was not limited to only Controller and Accountant General Department (CAGD) staff but cut across all classes of employees, in the public service, the CAGD would evaluate the peculiar nature of the credit union and factor it onto the business rules of the payroll to boost membership.

Madam Adzroe called on the management to ensure routine maintenance of the structure and provide adequate security for the complex.

Mr Baaba Jamal, Deputy Minister of Employment and Labour Relations, lauded CAGECCU for their visionary approach that would give employment to others.

He urged members and leadership to maintain the edifice very well by outsourcing its maintenance to a service management company.

Mr Jamal called for better products and flexible terms from leadership to members and other beneficiaries.

Mr Ben Crabbe, Board Chairman, CAGD, urged members to spread the news of enlisting more members into the Union and called on them to continue to work with perseverance and dedication that had culminated into the magnificent structure they had now.

Nana Agyepong, General Manger, Credit Union Association, said the dream to take credit union to the whole of Accra had been achieved following the inauguration of the edifice.