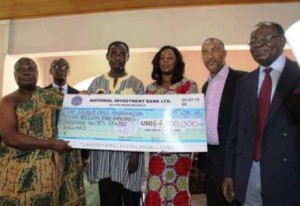 The Ghana National Petroleum Corporation (GNPC) has presented a cheque for $4.5 million to the Sickle Cell Foundation towards the construction of a centre of excellence for treatment and research on the disease.

A statement issued by the Corporate Affairs Department of the GNPC, said the corporation took the decision to fund the project at the Komfo Anokye Teaching Hospital in Kumasi following an approach from the Foundation, whose attempts to commence the project had stalled for many years due to lack of funds.

Presenting the cheque at a ceremony at the Manhyia Palace in Kumasi, Alexander Mould, Chief Executive Officer of the GNPC, said that most Ghanaians will know someone who has directly or indirectly been impacted by sickle cell disease, including the loss of loved ones.

“As the national oil company, we believe we should provide meaningful assistance where we can, in areas that have an impact on our people and contribute to national development. It would be tragic to deny Ghanaians the benefit of this much-needed facility that will provide comfort and save many lives.”

“We believe it is our responsibility to contribute to research and treatment for Ghanaians in the hope of finding a lasting cure that can be shared globally.”

Professor Kwaku Ohene-Frimpong, a leading Medical Practitioner on Sickle Cell and a Director of the Foundation, said the Sickle Cell Foundation was thrilled with GNPC’s investment in the project and was proud to work towards establishing a project of such scale and importance in Ghana.

“We are profoundly grateful to Otumfuo Osei Tutu II for his support to this project,” he said.

He said the Sickle Cell Treatment and Research Centre would provide ample space for research to attract scientists to improve and discover better treatment in addition to training for medical and administrative staff.

He said GNPC’s investment would also cover the cost of acquiring materials, construction, provision of logistics and equipment.

Prior to the collaboration, GNPC supported the Foundation to provide specialised training for health workers on sickle cell.

The Sickle Cell Disease (SCD) is a chronic condition with frequent attacks of debilitating pain (crisis), with many complications including anaemia, stroke, infections, and ultimately early death. It is the most common inherited disease in Africa.

Although the disease is found in many parts of the world, 80 per cent of all babies with SCD are born in Africa, where close to 400,000 are born each year.

In Ghana it is estimated that 15,000 babies are born each year with SCD, and almost 50 per cent of them die before age five, according to the World Health Organisation.

SCD impact in adults is believed to be widespread though difficult to measure because of the late introduction of new born screening programmes.

I have no knowledge of McDermott being a British fugitive – Dr. Wampah