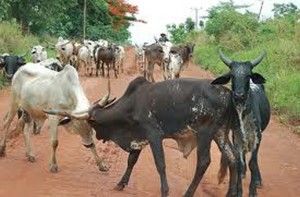 Two people have died, while three others are in hospital after consuming the meat of animals suspected to have been infected with Anthrax disease at Widnaba, in the Bawku West District of the Upper East Region.

Mr Benjamin Aggrey, District Director of Health, told the Ghana News Agency after a brief sensitization programme organized by the District Health Administration (DHA) in the community, that the people had many cattle and some of them died in December last year, and were consumed but caused no sickness.

However, on March 1, when the animals fell sick again some people ate the meat and afterwards showed symptoms of anthrax.

Mr Aggrey said investigations by the DHA revealed that the deaths were caused by the disease.

He said medicines were dispatched to the area on Monday March 7, to cater for about 30 people including the two families of the deceased who consumed the carcasses, to prevent further deaths.

The Director advised the chief and people to desist from eating the meat of dead animals without proper examination by veterinary officers.

The Assembly man of the area, Mr Elisha Asoswuni, said the animals of five farmers were affected, one losing eight cattle and 16 sheep.

Naba Ramson Anamor Akotam II, Divisional Chief of the area, commended the prompt response of the Health Directorate and said he would personally disseminate the information to his people.

Mr Alhassan Iddi, the District Veterinary Officer, said only one community had so far been affected but the technical officers were in the area to assess the situation, while they awaited vaccines for the animals.