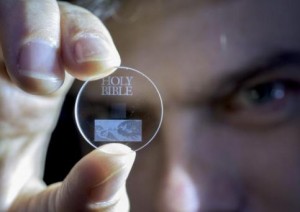 The “eternal” 5D digital data storage device can hold 360 terabytes of data and will have an almost unlimited lifetime at room temperature.

According to Southampton University, the storage device also has a thermal stability of up to 1,000°C.

Unlike regular compact discs, the 5D glass disc stores data in nanostructures within the glass, making it unaffected by scratches.

Considering its lifespan and its resistance to heat, chemicals and scratches, the 5D glass disc would open a new era of data storage for organizations with big archives such as museums, libraries and national archives.

Bigger than that, it would signify an enormous transition in the data storage evolution, and could put the necessity for new innovations in data storage at bay for a long time.

Some documents such as the Universal Declaration of Human Rights, the Magna Carta and the King James Bible have been immortalized with this new storage technology.

Southampton University says the scientists are now looking for industry partners to further develop and commercialize this new technology.