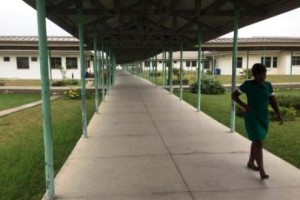 The Central Regional Health Management Team (RHMT) has designated the Trauma and Specialist Hospital at Winneba as the temporary Regional Hospital, until a new and permanent facility is built.

This follows the upgrade of the erstwhile Regional Hospital in Cape Coast, popularly known as ‘Interbeton’, to a Teaching Hospital in 2014 to support the University of Cape Coast School of Medical Sciences (UCCSMS).

Dr Samuel Tetteh Kwashie, the Regional Director of Health Services, who announced this at the opening of the 2015 Regional Performance review in Cape Coast, said the move was necessary because the upgrade of ‘Interbeton’ left a critical gap for the provision of secondary level healthcare in the Central Region.

He said the Winneba Hospital was selected based on the findings and recommendations of a technical committee established by the Regional Health Management Team to assess the various health facilities in the region.

The committee, Dr Kwashie said, also recommended that permanent regional hospital be sited at Ankaful where the Ghana Health Service has a large tract of land, adding that funding was being sourced to hopefully begin the project before the end of this year.

The three day review was on the theme: “Strengthening Sub-district Health Systems for the attainment of the targeted health outcomes”.

Dr Kwashie said the persistent delay by the National Health Insurance Authority (NHIA) in reimbursing health facilities in the region for periods ranging from eight to 11 months was dangerously crippling health services and threatening to compromise effective and quality health care delivery.

“The earlier we take bold steps to deal with the perennial but well known challenges associated with the managing of the NHIS, the better it will be for us all as a nation, and more importantly for the vulnerable and underprivileged populations,” he said.

Staff wastage was listed as one of the major challenges of the Region as 94 health staff including 17 midwives, 26 nurses and six physician assistants retired from active service last year, 35 other workers vacated post while 16 died in the year under review.

Dr Kwashie said 33 out of 135 nurses posted to the region failed to report for duty, likewise seven out of 19 medical officers.

On key public health issues, he revealed that despite the consistent reduction in the Region’s syphilis prevalence from 10.7 percent in 2011 to 3.4 percent in 2014, it continues to have the highest prevalence of syphilis in the country followed by Western Region with 14.4 percent.

He said the directorate was determined to strengthen the sub district health systems by focusing on health financing, workforce, information, supply management systems, leadership and governance and service delivery.

He acknowledged the efforts of all health staff in the Region and its stakeholders for their meritorious service during the period under review and urged them to strive hard to excel in their various fields of endeavour in 2016.

Most Reverend Matthias Kobina Nketsiah, Metropolitan Archbishop of Cape Coast, who presided over the opening ceremony, advised health personnel to regard their work as a continuation of the healing ministry of Jesus Christ rather than seeing it as a profit making venture.

This year’s recipients of the “Distinguished-Personalities-For-Health-Awards”, introduced last year by the Central Regional Health Management Team, were Reverend Prof. Harold Amoono-Koufi, founding Dean of the UCCSMS and the Catholic Health Service.