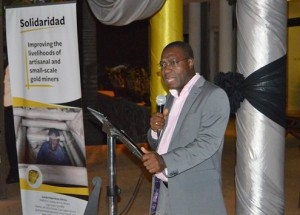 Solidaridad, an international civil society organization, has said it is targeting the global gold market to pick up at least five per cent of responsibly produced gold from artisanal and small-scale miners by 2020.

Solidaridad’s Gold Programme, which started in 2012, has the objective of improving the livelihoods of artisanal and small-scale miners and communities around them.

Mr. Isaac Gyamfi, West Africa Regional Director of Solidaridad, at a ceremony to celebrate the first traceable gold mined from Ghana, said the organization would build on the success of its pilot gold projects in mining communities by linking them to a growing market for responsibly produced gold within the next five years.

The organization has been working with the Artisanal and Small-Scale Mines (ASM) and Medium Scale Mines (MSM) to be able to produce gold sustainably through improved environmental, safety, social and business practices.

Solidaridad works to ensure that mines operate within accepted global standards. They promote the Responsible Jewellery Council (RJC) standard used as a tool in the work with MSMs, and the Fairmined (FM) standard for gold is used for the ASM sector.

Both are international standards for gold that promote responsible business practices such as formal and legal mining operations, human rights, labour rights and environmental protection, among others.

Already, two of the mines, Dakete Small Scale Mining Company in Tarkwa and Golden Resources in Wassa Akropong, have applied for Fairmined certification while awaiting the completion of their auditing.

The “Face of Ghana’s Gold” project, implemented from 2012 to 2015, was aimed at improving the lives of ASM gold miners, to address the negative effects of their activities on the environment and improve the livelihoods of 10,000 people in artisanal gold mines in the Tarkwa area.

The activities undertaken during the project implementation were focused on preparing the five ASMs to fulfil the criteria for Fairmined Certification.

These included a series of training courses made up of first-aid, safety, mercury, environment, distributing free personal protective gear, appointment of Fairtrade officers, support for school-going children of miners, and support for women’s groups.