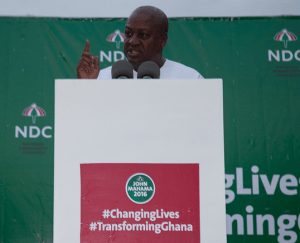 Alhaji Alhassan Bene, the General Secretary of the National Democratic Congress (NDC) Zongo Caucus, says the Caucus is targeting 100 percent of votes from the Zongo communities in the November polls.

He said the caucus was hopeful of achieving the target due to the massive developmental projects across the country, especially in the Zongo communities that President Mahama led administration had embarked upon.

Alhaji Benne made this known at a campaign launch by the Caucus to kick-start its campaign within the Okaikoi North Constituency in the Greater Accra Region.

He said President Mahama has shown great performance in development and excellence in providing long lasting solutions to major challenges confronting the country over the years hence the Caucus’s optimism of achieving the stated percentage for the party.

He said President Mahama led administration has taken developmental to the doorsteps of the people of which the people in the Zongo communities are part of the beneficiaries.

Alhaji Benne, who is also the former Chairman of the National Hajj Committee, said developmental projects such as construction of roads, schools, health facilities, drainages, water among others are the priorities of the NDC government.

These projects, he said, would attract Ghanaians to vote massively for the NDC come November, adding that the Airports at Tamale and Kumasi would help in airlifting prospective pilgrims to Accra to embark on Hajj pilgrimage.

He appealed to Ghanaians especially the Zongo youth to apply for the Youth in Entrepreneur programme which according to him would help reduce unemployment in the country.

He also called on the youth to be innovative and come out with programs that would create jobs for themselves.

Alhaji Zakaria Muntari, Greater Accra Regional Treasurer of the Caucus, said the recent tour by President Mahama across the country has exposed the New Patriotic Party’s lies about what they described as incompetence on the part of President Mahama led administration.

He said the the tour revealed the hard work of the NDC in the changing lives and transforming Ghana and the living standards of the people, adding that the Kwame Nkrumah Circle, Kasoa interchange, Ho University were hallmarks of the Better Ghana Agenda.

Bernard Mornah Chairman of the Peoples National Convention (PNC) was on Tuesday granted a GH¢20,000.00 …