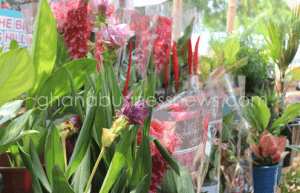 Mr Ismael Nii Adjei Brown, Director, Department of Parks and Gardens has called for a national horticulture policy to develop green spaces across the country for recreational and tourism purposes.

Mr Brown noted that there was no clear cut policy on the sector, and called on all stakeholders to come on board and initiate best practices aimed at developing a robust policy to improve horticulture.

He was speaking during a panel discussion in Accra on the Ghana Journalists Association (GJA) programme, “Business Advocate” on Ghana Television supported by BUSAC Fund, Denmark Embassy, United States Agency for International Development and the European Union.

Speaking on the topic: “The Creation of national Green Infrastructure Development Policy in Ghana,” Mr Brown explained that green infrastructure could be the centerpiece of a smart regional and metropolitan planning system, ensuring communities have a habitable environment, with clean air and water for generations to come.

He said green infrastructure served the interests of both people and nature and ensured that the quality of ecosystems was maintained, as well as allow species to thrive across their natural habitat.

He reiterated that investing in green infrastructure could provide many social, economic and environmental benefits, including water retention and flood alleviation, cooling urban heat islands, space and habitat for wildlife with access to nature for people, places for outdoor relaxation and improved health and well-being.

Mr Brown said there was no doubt that investing in green infrastructure created jobs and business opportunities, promoted sustainable development and economic growth for the country.

He said it was incumbent for the country to learn from the experiences of other countries like Kenya and Austria which had developed a strong policy on green infrastructure and implemented those policies for national development.

“We need to be creative and innovative as leaders and move away from government to governance and bring on board the private sector in the development of green infrastructure for the country and reduce the talking”, he added.

Mr Joseph Nyarko, a representative from the Ghana Tourism Federation lauded the tree-planting exercise idea across the country and urged authorities to enforce laws on illegal building to pave way for green spaces.

Mr Ben Anani Nsiah, Events Manager, Ghana Tourism Board called for stiffer punishment to individuals and organizations who failed to adhere to the rules and regulations governing town and country planning.

Mr Alhassan Mohammed, Principal Officer, Town and Country Planning Department said according to the Department’s by-laws, three trees were required to be planted in a compound to serve as green space, but that most people regarded the law with a pinch of salt.

He called for institutional restructuring for green spaces since most of those spaces had been converted into refuse dumps which affected the health conditions of inhabitants.