February 11, 2016 Politics Comments Off on No electricity, no campaigning – Buru-Kazigo Chief declares 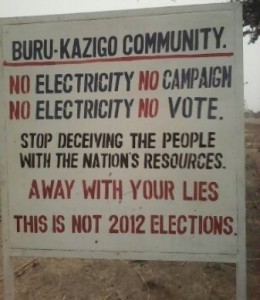 Buru-Kazigo, a community in the Upper East region has stated that it would not entertain any political party seeking to campaign in the community to solicit for votes from the electorate as long as there is no electricity.

To make the pronouncement known to the political parties, a sign board has been mounted on the road side leading to the community with the inscription “No Electricity No Campaign. No Electricity No Votes. Stop Deceiving the People with the Nation’s Resources. Away with Your Lies. This is not 2012 Elections”.

Addressing a Press Conference, organized by the community,  the Divisional Chief of Buru-Kazigo Community in the Kassena-Nankana West District, Kazigo Pe Parekuri Thomas Aluah, said the people had been deceived for far too long in terms of development, particularly electricity.

According to the Chief, his community which has a population of 1,156 people, needs about fifteen poles to enable it to be connected to the nearby community known as Navio which has electricity.

“What is even more painful is that the school pupils of the Buru-Kazigo Basic School cannot be taught the ICT subject and yet they have to write the BECE with their colleagues.”

“This is unfair and unjust and defeats the government’s policy for all Junior High students to write ICT subject during the BECE Examination.”

“We have made several appeals to the appropriate authorities without any positive results. This time around we have leant our lessons and will not allow any politician to step foot here to campaign for votes until the problem is fixed,” the Kazigo Pe warned.

The chief also warned all his people in the community that he would not tolerate any of them violating his warning and allowing any politician to campaign in the area.

The Chief who enumerated a number of projects the community had achieved under his leadership, including the establishment of the basic school and the construction of a dam, said what was needed most in the community was electricity to help augment the economic activities of the people.

“Through the formation of my NGO, Dezendani Integrated Development Organization(DIDO), I have empowered the community to initiate a Climate Change Project and also formed the Village Loans and Saving Scheme with support from other development partners which has helped the community members to stop degrading the environment, and ensuring food security,” he said.

The Chief commended UNICEF, the Catholic Relief Service and the Catholic Church for supporting the School with water and toilet facilities and appealed to other partners to do same.

The Head teacher of the Kasigu Junior High School, Mr Aloah Adua Muniru, stated that one of the major challenges facing the Junior High school, which has a population of 132, was the inability of the teachers to teach the students ICT as a result of the lack of electricity.

He said that the problem was affecting the performance of the students at the BECE level and also indicated that another challenge facing the school was lack of furniture.

The headteacher of the Primary School, Mr Awuvire stated that the Primary school, which has a population of 328, has no classroom infrastructure for the Kindergarten section compelling the children to occupy an old dilapidated structure built by the community years back.