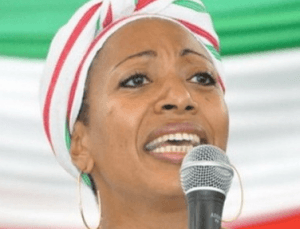 After her stunning defeat to Ivor Greenstreet, Samia Nkrumah has said that she blames no one but herself for ‘not doing enough susu to buy as many votes as my competitor did.’

‘I could petition the courts for a rerun, but I won’t do that,’ Samia told journalists after the results were announced, ‘I’ll instead make sure that I save enough to enable me make a splash at our next delegates’ conference.’

She addressed a message to their political rivals, in which she hinted that the CPP is going to cause a major upset this year: ‘For years, other parties thought they had the monopoly on vote-buying, but this year they better watch out, ‘cos Santa is coming to town…and he’s carrying a large sack of cash!’

Political scientists at the University of Ghana told our reporters that if Samia Nkrumah’s claim about the CPP’s newfound vote-buying capacity is true, it’ll signal great progress for Ghana’s electoral democracy: ‘It would mean that for the first time since 1992, the electoral playing field is finally being levelled and we’ll soon be seeing all the parties compete on equal terms.’

President Mahama also got a special message from Samia Nkrumah: ‘We’re going to give you a run for your money, no pun or irony intended. If you think you have enough money to buy votes, wait until you see the humongous pot of gold we have stashed up for November!’

But the NDC has reacted furiously to the claim that the CPP has laid in more money in store for vote-buying than they have, saying that they feel insulted by the claim.

‘We want to assure all NDC sympathisers that there is no need to panic at all,’ a government communicator said on radio Sunday night, ‘we have more money to buy votes than all the other parties put together, and multiplied and squared and tripled! And if that is not sufficient, there’s still enough time to raise more money by imposing another tax. Edey beeeee!’

The nanny business in Ghana

Ghana spends more importing oil than it makes from exporting it