The local currency could end the year between GH¢4.7 and GH¢5.1 Ghana a dollar, Mr Courage Kingsley Martey, an economic analyst at Databank, has predicted.

Last year, Mr Martey predicted the cedi to end the year at 3.9 to a dollar; the local currency subsequently ended at 3.8 to a dollar.

According to statement issued by Mr Fidel Amoah, the Content Manager of Lamudi Ghana, and copied to the Ghana News Agency on Friday; the economic analyst stated that the cedi is likely to follow the same trend as recent years and depreciate due to lower inflows of foreign exchange and a rise in demand for foreign currencies.

Mr Martey suggested that the stability of the cedi in January was due to revenue inflows accrued from foreign debt instruments.

He was less optimistic about the cedi’s fortunes from February onwards. He explained that certain external factors coupled with an increased demand for foreign exchange would put pressure on the local currency.

“The cedi experienced stability in the last quarter of 2015 mainly because of some inflows accrued from foreign debt instruments. As a result, the country closed the year with reserves significantly above three months import cover,” he said.

Mr Martey said: “Due to this, the cedi maintained its stability in January. As we enter February, sustainability of the exchange rate stability would be tested by the re-emergence of the seasonal pressures and elevated external risks.

“Crude oil price remains low while the gold price could slump depending on the United States’ monetary policy. These commodities are two of Ghana’s main sources of foreign exchange,” he said.

“Conversely, the repayment period for COCOBOD’s facility begins around that time, ultimately constraining foreign exchange inflows. Additionally, businesses would be looking to restock goods sold during the Christmas period, leading to an increased demand for foreign currencies,” he stated.

Mr Martey suggested that the cedi may depreciate the highest during the first half of 2016 due to the pressures of repayment and increased demand. He added that the latter half of the year would witness a less dramatic depreciation.

The statement said in November this year, the nation heads to the polls; previous election years have been characterized with rising inflation, higher liquidity and a steep depreciation of the cedi.

Mr Martey indicated that this election year would be an improvement on previous ones due mainly to the presence of the International Monetary Fund.

“Unlike in previous [election] times, we started this year under the IMF program. So we expect the fiscal and monetary discipline to continue throughout this year,” he said.

The statement recounted that real estate is one of the main sectors of the economy affected by foreign exchange; properties are typically valued in foreign currencies, emphasizing the need for a stable cedi.

“A long term stability of the cedi would maintain confidence in the financial and real estate sectors. This would lead to lower interest and mortgage rates, paving the way for more house hunters to own their very own home,” she said.

Launched in 2013, Lamudi is a global property portal focusing exclusively on emerging markets.

The fast-growing platform is currently available in 34 countries in Asia, the Middle East, Africa and Latin America, with more than 800,000 real estate listings across its global network. 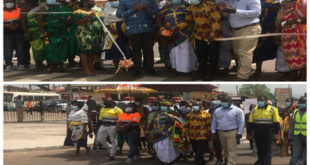