Ampomah and Amponsah named best Athletes of the Year

January 30, 2016 Sports Comments Off on Ampomah and Amponsah named best Athletes of the Year 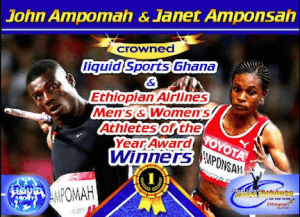 Both athletes excelled during 2015 with John Ampomah performing well in javelin and whilst Janet also excelled in the 100m/200m events.

Ampomah became the first Ghanaian athlete to throw beyond 80m after throwing a spectacular 81.55m in April, 2015 and 82.94m to win silver at the 2015 All Africa Games last year in Congo Brazzaville.

Ampomah has broken the national javelin record an unprecedented nine times since 2012 when he came onto the national scene.

Sprint queen Janet Amponsah produced life time performances in 2015, clocking 11.29s in the 100m and 23.05s in the 200m events respectively to qualify for the 2015 IAAF World Championships. In the process, she recorded the fastest time ran by a Ghanaian since September 16, 2006.

The two winners are both based in the USA where they are currently pursuing their academic studies and sporting careers at the Middle Tennessee State University on Ghana Athletics Association sourced scholarships.

Ampomah, the national team captain expressed gratitude saying ‘‘I would like to thank Prof. Francis Dodoo, the GAA, GOC the Sports Ministry, associate coaches and my coach Dean Hayes for their continual support and opportunities. It is an honor not just to win the first ever Liquid Sports award but I am glad that our sport, athletics is also gaining the recognition it deserves.

“This recognition I believe will have much impact on some of us psychologically and this award will encourage all of us to strive hard and do our possible best no matter what it takes because now we know we have good people who will encourage us in all situations’’.

He called on corporate bodies to join hands with the government and help support the young and talented athletes not only in athletics but in the other sports as well to raise high the flag of Ghana in international competitions.

The Managing Editor of www.liquidsportsghana.com Erasmus Kwaw congratulated the duo for their sterling performances last year and believes it would be an inspiration and examples of true sporting disciplines to the younger generation.