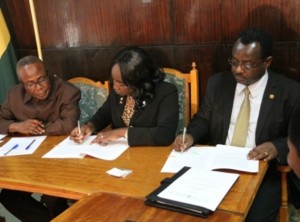 The technical assistance is aimed at strengthening the country’s capacity to control and prevent further spread of the disease, hence contain it at its source and better manage the risk factor.

Dr Abebe Haile Gabriel, Deputy FAO Regional Representative for Africa and FAO Representative to Ghana, said at the signing of the agreement in Accra that the agreement was under the organisation’s technical co-operation programme, worth $413,000 and is in response to a request made by the country to support efforts of government towards controlling the Highly Pathogenic Avian Influenza.

He said the support was an emergency assistance to control the H5N1 outbreaks and mitigate risks for virus spread.

The FAO Representative to Ghana said the agreement, which is a technical cooperation grant from FAO, is to control the HPAI disease in the affected regions and to mitigate the risk of its spread to free areas of the country and other countries in the West African sub-region.

He said it would further contribute towards safeguarding of good security and food safety, strengthening resilience and protection of public health in the country.

Dr Abebe said this was a demonstration of FAO’s continued commitment and resolve to collaborate and coordinate efforts to stamp out the spread of the avian influenza and its subsequent elimination from Ghana.

He said FAO and government have been collaborating in support of efforts directed at outbreak investigations, and case tracing surveillance and collection of samples.

“Some of the measures employed to control the outbreak included depopulation of infected birds and decontamination and provision of basic training in disease recognition,” he added.

Dr Hannah Louisa Bisiw, Deputy Minister of Food and Agriculture in charge of Livestock, recalled that following the outbreak of the disease, government gave a directive for the restriction of movement of live birds.

She said there were 36 outbreaks of the disease across the country and called on poultry farmers to activate bio-security systems on their farms.

Dr Bisiw said government had released GH₵11 million for compensations and also procured other items to curb the disease.

“Twenty-two pickups and 120 motorbikes were distributed to veterinary officers to be used in their official duties in terms of emergency,” she added.

She commended the FAO for its continued support to the agricultural sector and expressed the hope that the support would go a long way to prevent the disease.