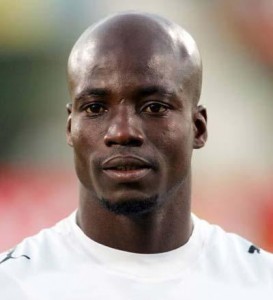 Former Black Stars captain Stephen Appiah has been unveiled as a Peace and Unity Ambassador ahead of the General elections scheduled for November 7, 2016.

The Juventus player was named as a peace ambassador during the launch of the Unity match which will involve a World select side against Kumasi Asante Kotoko and the Black Stars of Ghana on June 8 and 11, 2016, in Kumasi and Accra respectively.

Appiah who guided Ghana to her maiden World Cup appearance said: “As the former captain of the Black Stars and a former footballer I strongly believe my status today has been made possible by Ghana. From the moment I was offered my first opportunity to wear the national colours and through my days with the various national teams till I was made the captain of the Black Stars.

“I believe Ghana has been so good to me and one of the best ways to give back to my beloved country is to commit myself to its development which can only be achieved by fostering an atmosphere of peace and unity.”

“My mission is to set the tone for the elections and will use sports particularly football since it is the passion of the nation and has a bonding effect on us. I am convinced that, we shall have a peaceful election and despite the results, Ghana first”.

The Vice President of the Ghana Football Association (GFA) George Afriyie also pledged his outfit’s unconditional support to promote peace and promised that the FA is ready to provide all the needed assistance to make the football matches a success.

Ex England captain and Arsenal defender Sol Campbell and former Ghanaian-born Dutch international George Boateng were also in attendance to contribute their quota in promoting peace in Ghana before, during and after the Elections.

Campbell’s team, the World XI, which will include Edgar Davids, Emile Heskey, Didier Drogba, Samuel Eto’o, Steve Mcmanaman, Patrick Kluivert and others, will first play Asante Kotoko before they meet the Black Stars of Ghana in the second match.

The former Minister of Youth and Sports Dr. Mustapha Ahmed commended the organizers of the Unity match, Primeval Media Ghana limited, for the initiative and added that, government is committed to ensure peace prevails in the election.

Facebook Twitter WhatsApp LinkedIn
2016-01-20
myadmin
Previous A new deal on energy for Africa – Power, potential and partnership
Next Be mindful of your utterances – NCCE to politicians