Home / General News / Did the Power Minister lie about who is paying for AMERI project civil works?

Did the Power Minister lie about who is paying for AMERI project civil works?

December 18, 2015 General News, Lead Comments Off on Did the Power Minister lie about who is paying for AMERI project civil works?

Since the story broke last weekend about the AMERI Energy agreement with the Ghana government there is still no clarity about the deal.

While the contract does not specifically mention civil works, the Minister of Power in his statement to the media on Monday said among other things:

“It must also be explained that the quoted price of $220 million in the Norwegian story for outright purchase of similar turbines is exclusive of all other costs such as auxiliaries, balance of plant, civil works, sub-station, installation of equipment, cost of financing, operation and maintenance etc.

Under the agreement with AMERI Energy, the cost of all these auxiliary works is being borne by AMERI Energy.”

But the agreement states unequivocally in Section Four that; The GOG, (that is the Government of Ghana), shall be required, at GOG expense to provide an acceptable Site that is available immediately upon the effective date.

AMERI ENERGY ASSUMES NO LIABILITY, OBLIGATION OR RESPONSIBILITY FOR THE SITE AND MAKES NO REPRESENTATION OR WARRANTY WITH RESPECT TO THE FITNESS OR ADEQUACY OF THE SITE OR UTILITIES AVAILABLE.

In addition to its other obligations under this agreement the GOG shall have the following obligations:

Among others, the government is responsible for security, utilities, supervision and management. 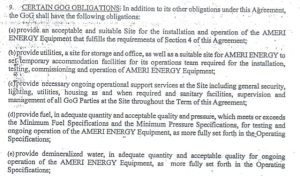 The government under the agreement is also required to fuel the plant, the cost of which shall be borne by the Volta River Authority, even though AMERI Energy owns the plant for five years.

In the Ministry of Finance’s Annual Report on the Petroleum Funds under details of use of the Annual Budget Funding Amount (ABFA), the Ministry recorded some payment of over GH¢15 million. It is stated as Payment for the interim payment – Civil works under 250MW Ameri Emergency Power Project at Aboadze in the Western Region. The specific amount is GH¢15,144,563.85.

Meanwhile, Ibrahim Mahama, the CEO of Engineers and Planners, the construction firm that did the civil works for the project has been cited in a report by Citi FM saying he was paid a “meager GH¢25 million” for the work.