For the Minister of Power, Dr. Kwabena Donkor, not knowing his geography is not his only handicap; he doesn’t know the difference between dumsor and load shedding. But even more disturbing is the fact that, he doesn’t know the price of the world’s most popular turbines, the TM2500+, often referred to as a power plant on wheels.

Dr Donkor goofed while delivering a speech on Thursday September 17, 2015 at the opening of “Powering Africa” –a two-day energy investment summit in Accra.

The equator does not pass through Ghana and is at least 600km away.

He is also reported to have said dumsor was not the same as load shedding, but to Ghanaians, they are one and the same thing, the energy crisis that has hit the country for some four years and believed to have cost the country some $2 billion.

Dr. Donkor and the deputy Attorney-General, Dominic Ayine have signed an agreement to pay more than twice the price for these types of turbines supplied to the country by AMERI Group, a company being ran by a man wanted for fraud and organized crime in Norway, according to an investigative report by a Norwegian newspaper Verdens Gang (VG).

VG reports that according to the agreement that Ghana has signed with AMERI, Ghana will lease the ten gas turbines for five years. After that, Ghana becomes owner of the turbines after paying an equipment cost of $510 million.

In addition to the equipment price of $510 million, Ghana will pay variable costs of $16 million annually, the newspaper said citing a report from the Parliament of Ghana. Ghana will also need to pay for the gas to power the ten turbines, the newspaper, added.

The newspaper reports that Parliament approved the agreement between Ghana and AMERI after the government had signed the deal.

That same equipment could have been purchased for $220 million. Ghana would have saved $290 million; the newspaper quotes Amin Adam, the Executive Director of the Africa Centre for Energy Policy (ACEP) as  saying.

VG says its investigations show that the standard price for these turbines is about $20 million.

A ghanabusinessnews.com Google search on the price of the turbines came up with this. See photo below. 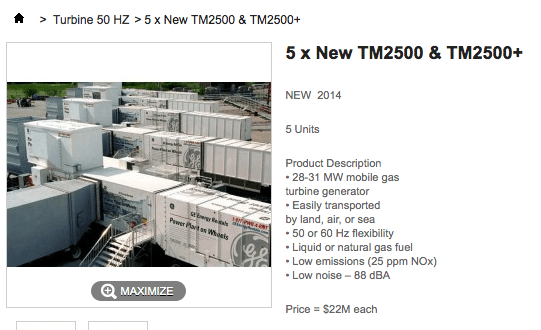 According to the newspaper, the man who signed for AMERI as its Chief Executive is wanted by Norwegian and Swiss police for spectacular acts of fraud committed in the last ten years.

When VG’s reporters interviewed the Power Minister in his office in Accra and showed him the man’s photo, Dr. Donkor identified him as 40-year-old Pakistani Norwegian Umar Farooq Zahoor.