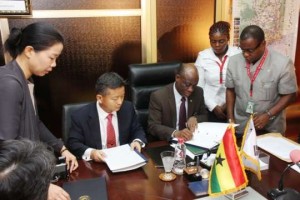 Ghana and the Republic of Korea have signed two bilateral documents geared at facilitating and enhancing cooperation between the two countries.

The two documents are the Framework Agreement on Grant Aid and the Framework Arrangement of the Concessional Loans from Economic Development Cooperation Fund (EDCF).

Speaking at the signing ceremony in Accra, Mr. Seth Terkper, the Minister of Finance and Economic Planning, said the signing of the two agreements was significant as there had been a delay since the last agreement was signed in 2012.

He noted the delay in signing the agreement was not due to hesitation on Ghana’s part in its relationship with Korea, but due to the need to reassess the loan policy of the country in light of the economic challenges posed by global trends, and the transition to lower middle income status.

He said the framework agreement was a comprehensive document covering grants, technical assistance and some loans, without which it would be difficult for Korea and its embassy in Ghana to offer any assistance to the country.

Mr. Terkper opined that the EDCF facility is now one of the few unique facilities that continue to offer loans with an extensive repayment time to Ghana, in this time of dwindling access to grants and concessional financing, caused by the transition to middle income status.

“The mix of grants completed by loans therefore is something that would help Ghana in its transition path. The EDCF concessionary facility in particular is something to which we are committed when it comes to fruition”.

He noted that under the facility, Ghana would get access to the equivalent of $200 million between now and 2017, while the loan facilities from the Korean Exim Bank were still concessional, thus helping in development.

He said the Bill before Parliament on Ghana’s establishment of an Exim Bank, upon discussions with the Korean Exim, was expected to be passed soon, after which a formal request will be submitted to the government of Korea through the Korea Exim Bank for assistance.

He noted that the Korea Exim Bank had done a similar thing for Vietnam, and Dominican Republic through its technical assistance programme.

Mr. Woon-Ki Lyeo, the Korean Ambassador to Ghana, said Korea had been a development partner of Ghana since 1990, providing assistance in the form of grants and aid by the Korea International Cooperation Agency (KOICA), as well as loans and loan cancellation through the Korean Exim Bank.

He noted that the signing of the Framework agreement on KOICA grant aid will facilitate development collaboration, especially the dispatch of Korean experts and volunteers to Ghana to share their development experiences, skills and knowledge with their Ghanaian counterparts.

He said the Korean Exim Bank had been providing EDCF loan facilities, which had supported various projects in Ghana to the tune of $182 million, including the ongoing Wa Water Supply Project, and the Prestea-Kumasi Power Enhancement Project, which will begin early next year.

“The Framework Arrangement on EDCF Concessional Loans will enable Ghana to obtain low interest long term loans for Ghana’s national development up to $200 million through 2016,” he stated.

Mr. Woon also stated that the signing of the agreements was timely as the Korean Government was ready to renew its commitment to step up its partnership with Ghana by ‘re-designating Ghana as one of the seven official development assistance priority destinations in Africa for the 2016 to 2020 period’.

He added that Korea was committed to cooperating with Ghana in all areas of the bilateral relationship and to work closely to bring advancements in the agriculture, education, health and energy sectors in Ghana.