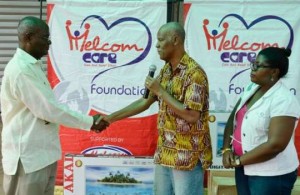 Melcom Care Foundation, the charity wing of the Melcom Group of Companies, has donated an LED television set and an amount of GH₵ 2,500.00 to the Institute of Financial and Economic Journalists (IFEJ).

The donation was towards the Second IFEJ-Flamingo Awards for Business and Financial Journalists in Ghana to be held on Friday, December 11, 2015 in Accra.

The Awards is to encourage journalists to bring out quality reportage especially in the field of business and finance, so as to bring about positive transformation in society.

Mr Godwin Avenorgbo, Director of Communications of the Melcom Group of Companies, who made the presentation, said the donation was in line with the Group’s media support policy.

He said the company had decided to donate a 40 inch television set as prize and an amount to help organise the award ceremony.

Mr Avenorgbo said the Group was pleased to ensure that across board business news does not only serve as a platform to showcase new brands and promotions, but also an opportunity for journalists who have specialized in that area.

He said it would also encourage journalists to write analytical report that would throw the searchlight on bottlenecks in the business facilitation process for the benefit of the policy makers, regulatory agencies, the business community and the consumer: be it exports, imports, duties, clearing of goods, manufacturing, distribution or energy supply.

He said the media serves all and sundry, and therefore, deserves to be supported in the discharge of their duties, whereas, the dwindling fortunes of state as influenced by the harsh economic conditions, today, affects the media negatively, thus requiring more resources to gather and disseminate news for public consumption.

Mr Lloyd Evans, the President of IFEJ, who received the donation on behalf of the Institute, expressed his gratitude to the Group for granting their request to support the forthcoming event.

He said there were 10 categories but only four had qualified for an award, given that the standards put up were not the best, and therefore, tasked journalists in the country to go beyond the extra mile, to report on analytical and informative issues, so far as business news was concerned.