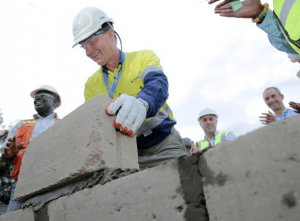 Ghana has in recent years been plagued by several fire outbreaks across the country. The National Fire Service has struggled to deal with many of these outbreaks, partly due to how distant fire service stations are from the point of incidence. The number of fire stations, according to the National Fire Service, is woefully inadequate as it falls below what is needed to cover all districts.

The Asutifi North District of the Brong Ahafo Region is one such area without a fire station. Last year, an outbreak which could have been put out within a relatively short period of time turned out to be a devastating experience for the people in the area. It took several hours for fire officers from another district to travel there and salvage the situation; at a time several valuable properties had been destroyed.

Following these developments, Newmont Ghana’s Ahafo Mine, has begun work on the construction of a Fire Station at Kenyase to serve the Asutifi North District.

The $100,000 project is expected to be completed within the next four months and will serve the district and some other communities in the region. The facility when completed will have facilities such as a Fire Tender Shed, Offices for senior and junior officers, a conference room, a big compound with a mini roundabout and other facilities required for a Fire Station.

The project is a collaborative effort between the Ahafo mine, the Asutifi North District Assembly, and the National Fire Service. The Assembly offered the parcel of land, while the Ghana National Fire Service will provide the logistics as well as manpower when the project is completed. The company has also established an emergency mutual assistance framework that includes having joint drills and exercises.

Addressing guests at the block laying ceremony in Kenyasi, the President and Chief Executive Officer of Newmont Mining Corporation, Gary Goldberg, who was on a working visit to the Ahafo mine, expressed his appreciation to the Asutifi North District Assembly, Chiefs of the community and all other stakeholders for their continuous support and called on them to keep building such partnerships.

“We still would count on that support as we confront the challenges for operating in a low gold price era while also setting our eyes on pursuing some of the growth projects in Ahafo”, Gary stated.

Also present at the ceremony was the Asutifi District Chief Executive (DCE), Eric Addae, who described Newmont as a good development partner to the Asutifi North district and called on other corporate bodies and institutions to partner government agencies to for development projects.

“Newmont continues to be a good development partner to the Asutifi North district. As a district, we look forward to more collaborative efforts such as this one”.

On behalf of the other chiefs present at the ceremony, Oseadieayo Osei Kofi Abiri, Chief of Kenyasi no. 1 expressed his appreciation to Newmont in their quest to build the fire station and called for more developmental projects.

“We appreciate Newmont’s continuous support to build our communities”.