May 22, 2015 General News Comments Off on Staff of Judicial Service in Tarkwa join strike action Staff of the Judicial Service in Tarkwa have joined the nationwide strike action of the service to register their displeasure at the non-payment of their allowances.

When the Ghana News Agency (GNA) visited the various courts in Tarkwa around 9.00 a.m. on Wednesday, the staff had not reported for work.

The doors of the courts were locked and the whole place was very quite with only one police officer on duty at the Tarkwa Circuit Court.

Some people who had cases at the courts expressed disappointment at the strike.

Madam Yaa Badu, a trader, told the GNA that she traveled from Asankragwa with her sister whose case was to be heard at the Tarkwa Circuit Court, but upon their arrival, they were informed by a police officer that the court did not sit.

She urged the government to give what was due to the workers, to enable them return to work. 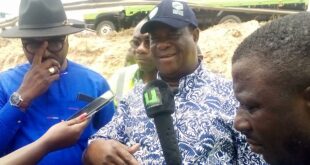 The Minister of Roads and Highways, Mr Kwasi Amoako-Atta, says the Ministry is working on …