Four days after downgrading Ghana’s sovereign rating from B2 to B3, ratings agency, Moody’s has downgraded Africa-focused oil producer Tullow.

Moody’s also downgraded GCB Bank Limited’s local-currency deposit ratings to B3 from B2, March 20, 2015, a day after downgrading Ghana’s ability to borrow from the international financial market.

In a statement issued in London and copied to ghanabusinessnews.com Tuesday March 24, 2015, Moody’s Investors Service says it has today downgraded Tullow Oil’s corporate family rating and probability of default rating (CFR) to B1/B1-PD from Ba3/Ba3-PD, because Tullow’s largest operations are located in Ghana.

“The oil and gas explorer has major projects in Ghana, Ethiopia, Kenya and Uganda,” it adds.

The outlook on all Tullow’s ratings remains negative, Moody’s says.

Explaining the reasons for the downgrade, Moody’s notes that Tullow retains considerable concentration in Ghana, where its core Jubilee production field is located.

“As a result, Tullow’s CFR remains constrained by the ratings of its largest country of operations. However, we continue to position Tullow’s ratings two notches above the sovereign rating of Ghana to reflect a number of risk mitigating considerations, including the off-shore production and direct international sales of crude, its US dollar-based pricing and its established and diversified financing framework, which does not depend on the domestic banking system in Ghana.

Finally, Tullow also enjoys a limited degree of cash flow diversification with approximately half of production in other West African countries,” it says.

Moody’s however, admits that Tullow’s fundamental business position remains solid, supported by its sizeable oil and gas resource base, which has been enhanced in recent years through successful exploration and appraisal programme leading to the opening of new hydrocarbon basins and significant oil discoveries, including in Ghana, Uganda and Kenya, that underpin the company’s long-term production growth trajectory.

“In the near term, the rating reflects Tullow’s focus on the execution of the TEN project, off shore Ghana, that is set to add materially to the company’s high margin oil production in 2016/2017. Strong and timely execution of TEN is the key priority for the company in the next 12 months, and the project remains on target for completion in mid-2016,” it says. 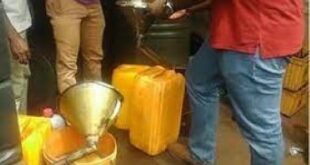