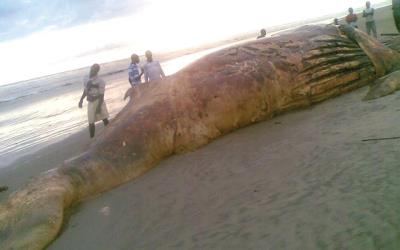 Ghana sets up committee to determine cause of whales’ death 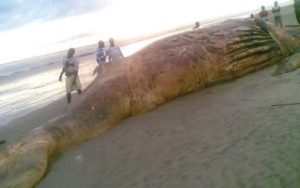 A committee has been set up to find out the cause of death of marine mammals washed ashore along some parts of the country’s coastal lines.

The setting up of the committee followed a directive from President John Dramani Mahama to the Ministry of Environment, Science, Technology and Innovation to investigate the phenomenon and make the appropriate recommendations.

A director in charge of the Oil and Gas Unit at Ghana’s Environmental Protection Agency (EPA), Mr Kojo Agbenor-Efunam, made this known to the Daily Graphic on the sidelines of a seven-day training workshop on oil, gas and mining reporting organised in Accra by Penplusbyte, a non-governmental organisation.

He said the committee had been tasked to take samples from the latest whale which was washed ashore.

As of October 21, 2013, eight marine mammals, believed to be whales, had been spotted dead along the shores in the Western Region within two months, while one whale was washed ashore at the Krokrobite Beach in the Greater  Accra Region.

Friends of the Nation, a socio-environmental NGO in the Western Region, which has been documenting and keeping track of the number and locations of the dead mammals, indicates that in the past four years, 19 carcases of such mammals had been found.

Residents of coastal towns and some non-governmental agencies had linked the increasing death to the recent offshore oil and gas production activities.

A number of questions had been asked any time the whales were washed ashore in a decomposing state, while the EPA was informed about such incidents.

The Chief Fisherman of Asanta, Mr Joseph Ebambey, was not happy about how EPA officials in Takoradi and the local assembly in the Ellembelle District buried the whales without trying to find out the causes of their death.

Friends of the Nations had asked experts to look into the incident to find out if the whales were being hit by vessels in the deep sea and died because of the collision, or if the whales became disoriented due to noises caused by oil and gas exploitation activities and, therefore, swam to shallow waters where they died?

The Programme Coordinator, in charge of Natural Resource Management of the Friends of the Nation, Kyei Kwadwo Yamoah, stated that “the bio-diversity conversation was of utmost importance to ensure balance in the eco-system’s functions and services.

The washing ashore of dead mammals should be a major concern not only for coastal communities, but for all of us. When whales die, we have to take it seriously and investigate to unravel the mystery of their deaths.”

Mr Agbenor-Efunam stated that “the whales are not being washed ashore as a result of the oil exploration”.

“I have studied geoscience and there is no link between dying whales and oil and gas exploration activities,” he stated.