Dr Joe Oteng-Adjei, Minister of Environmental, Science, Technology and Innovation (MESTI), has called on Christians to be mindful of environmental issues around them.

He said they must also support the government in its efforts towards sustainable development to ensure good ecological management.

Dr Oteng-Adjei, whose speech was read by Dr Sylvester Anemanah, Chief Director of MESTI, was speaking at the 5th Annual Interfaith Symposium in Accra.

The programme organised by the Presbyterian Interfaith Research and Resource Centre (PIRRC) is on the theme: “Religion as a resource for promoting sustainable environment”.

The symposium which was attended by adherents of the Christian, Muslim and Traditional faiths was to create a platform to discuss the role of the leaders of these religious groups in promoting sustainable environment.

Dr Oteng-Adjei said the environment including the living and the non-living things in one way or other have some effect on man.

He said after the creation everything was green and perfect, and God wanted it to remain that way by telling man to be fruitful, multiply and replenish the earth.

He said for man to be able to manage the environment very well by using resources sustainably, he must promote good environmental practice.

Dr Oteng-Adjei said the Ministry was making efforts to implement its policy and programme by mobilizing logistics and adequate budgets to hire experts as well as train personnel to carry out its strategy.

He called on the Presbyterian Church to inculcate in its members their culture of maintaining good environmental management in their institutions.

Rev Samuel Asiedu Amoako, Lecturer at the Kwame Nkrumah University of Science and Technology (KNUST), who gave a Christian perspective on sustainable environment, said that the world’s religions in the past have neglected environmental concerns.

He said that the exploitation of the natural resources and unbridled development has become a threat to the very existence of human beings and life on earth.

He said due to the ecological challenges facing the plant, religious, political and scientific leaders found the need to rethink their attitude and approach towards the continuous exploitation of the resources.

Rev Amoako noted that the Christian religions despite its problems have enough resources to deal with the environmental challenges and also help to shape human attitudes towards nature.

He charged Christians to engage themselves in issues of ecological theology and ethics and critique the current policies and practices that have led to problems such as climate change and environmental damage.

He called for the reduction of the consumption pattern particularly energy use which would have a direct implication for addressing climate change.

Hajia Nasiba Tahiru Swallah, an Islamic scholar who spoke on the topic: “The role of Islam in preserving Gods creation” stated that Allah is the creator and sustainer of the environment.

She said the mindfulness of Muslims must not be reserved for times of prayer and spiritual devotion alone but must cover all of their actions such as feeding the poor and hungry, struggling against injustices and working to establish peace.

She said some of the injustices in the system include climate change, environmental degradation, air and water pollution as well as feeding ever growing population of the world.

Hajia Swallah said that one of the basic principles that support an Islamic vision of human’s relations with the environment is that Muslims are God’s deputies on earth.

She said their mission as God’s deputies is to care for and maintain the world without causing harm to it. 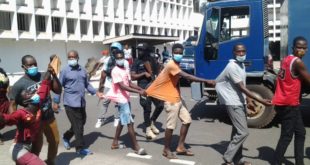 Nene Kwaku Agblorm II, a traditional ruler and 26 others alleged secessionists, have now been …