“I want to particularly commend the Speaker for providing me with the calming effects to go for the swearing-in as I initially found it difficult to come to terms with the death of the late President,” he said.

President Mahama said this when Mrs Joyce Bamford-Addo, Speaker of Parliament, led a delegation from Parliament to call on him at the Castle, Osu.

Mrs Bamford-Addo, accompanied by Edward Doe Adjaho, first Deputy Speaker and Mr Jones Kugblenu, Director of Public Affairs, was at the Castle to congratulate President Mahama on his new responsibility as President of Ghana.

President Mahama was sworn in on Tuesday night following the death of President Mills at the 37 military Hospital earlier in the day.

He said although Parliament was not a new place for him, he felt traumatized and could have found it difficult to go in for the swearing-in ceremony, but for the encouragement of the Speaker and other Members.

He promised to institutionalize peace and unity, the key values that late President Mills had left for the nation.

Mrs Bamford Addo said although the death of President Mills was traumatizing and irreplaceable, they in Parliament were hopeful that President Mahama would be able to continue with the good work that his predecessor had embarked on. 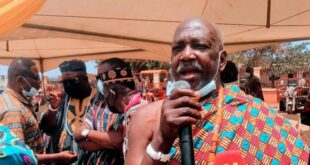