Vodafone Ghana has led an operation in collaboration with Police to clamp down on activities of six SIM box operators in Teshie Nungua, a suburb of Accra and other parts of the country.

The operation was in line with the company’s commitment to fight the operations of SIM box fraudsters in Ghana, a statement issued to the Ghana News Agency on Tuesday said.

It led to the retrieval of 25 SIM box equipment valued at approximately $1 million and the arrest of seven individuals, translating into a total saving of GH¢7.2 million in revenue loss for the government and the industry.

“This is the greatest success achieved by Vodafone in its quest to eliminate the fraudulent operations of SIM box operators,” the statement said.

The success, it said, came after months of surveillance in the Greater Accra, Central and Eastern regions, especially to track the activities of SIM Box fraudsters and expose them.

The Head of Corporate Security at Vodafone Ghana, Raymond Xaba noted in the statement “We are glad that our constant surveillance has led to the arrest of these fraudsters whose operations not only affect us as a network, but also robs the country of large amounts of revenue which may have otherwise been used to undertake development projects.

“We are very proud of today’s achievement because it’s helped avert a total revenue loss to the state as a result of these activities which amounts to about GH¢7.2 million.

“We are excited to be leading the way in arresting and putting an end to these activities. We have already recorded great successes in this operation and we will continue to pursue all the individuals who have committed themselves to such illegal activities.”

Xaba reiterated that Vodafone Ghana would continue to partner the government and the security agencies to put an end to this fraudulent activity.

“This is so far the highest detection we have made.”

In May last year, Vodafone Ghana’s Fraud team together with the Police CID Anti Fraud unit embarked on a joint operation that led to the seizure of SIM fraud equipment worth $200,000. 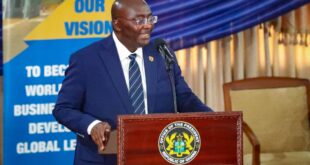