Bank of Ghana to investigate allegations against rural banks

August 29, 2011 General News Comments Off on Bank of Ghana to investigate allegations against rural banks

The Bank of Ghana (BoG) has said it would investigate allegations made against officials of the Adansi Rural Bank brought and would address problems the bank is facing.

Some of the allegations are granting of huge credit facilities to individuals and businesses, giving loans to directors without BoG’s ratification in violation of the Banking Act and opening of branches without trained staff and inadequate internal control systems.

He said another worrying trend in rural banking is the fact that some of them tend to behave like large commercial banks.

Mr Donkor said some of the rural banks had breached their traditional catchment areas, moved to urban centres and had gone into certain types of business and granting of facilities for which they might not have the expertise to sustain it.

“It is for this reason that we need discipline, law-abiding and committed board and management to ensure that the hard earned depositors and shareholders’ funds are adequately protected.” he said.

Alhaji Lateef Majdoub, the Adansi North District Chief Executive, appealed to the management and the board to step up their lending support to the people who are largely farmers and small scale business on flexible terms. 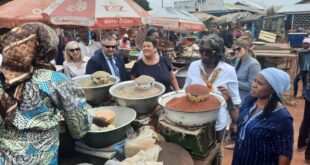 US government to give $2.5m development support to Ghanaian farmers – Ambassador

Nigerian in court for allegedly stabbing co-tenant over woman

Emmy Duro, 29, a Nigerian businessman has appeared before an Adentan Circuit Court for allegedly …