Vodafone Ghana has introduced a device called Mi-Fi that enables wireless access to the internet for a maximum of five persons at a time within 100 meters radius from the location of the device.

Mi-Fi enable fives persons with either phones, laptops or tablets that have Wi-fi to connect unto the internet at the same time so long as they are within 100 meters radius and have a password to the device.

The device is currently available at Vodafone’s high speed internet café on Osu Oxford Street for testing within its interactive zone, where all Vodafone data products are live for easy trial by customers.

National Retail Manager at Vodafone Ghana, Mr. Clement Wiredu told journalists that Mi-Fi gives access in the home, adding that those who have good phone reception in their homes could get 3G service on Mi-Fi and those with poor service could get the EDGE (2G) on Mi-Fi.

“All you need to do is to find the best reception spot in your home and fix the Mi-Fi device and it will pick the wireless signal and transfer it to any device with Wi-Fi at any point in your home, be it the bed room, kitchen, study or even your backyard garden provided the user is within the radius,” he said.

He said Mi-Fi goes for only GHC186 and came with a Vodafone data card containing enough credit for the first one month access to the internet then the user would have to recharge the credit before usage.

Mr. Wiredu said it also came with a battery and charger which could last for at least four hours when five persons use it simultaneously, but much longer when used by fewer persons at a time.

“Most people now prefer Mi-Fi to the dongles because the dongle is limited to one person at a time and when the reception is not good you have to keep moving your equipment till you get the best reception with your home,” he said.

He said Mi-Fi was also good for sharing and convenient for students using their separate laptops and devices for online assignments or research at the same time at home, adding it is better and cheaper than buying five dongles for all the devices at home.

Head of Sales and Partner Markets at Vodafone Ghana, Michael Nii Boye Adjei said the Osu 24-hour internet café and retail shop, which had 29-seater terminal area, a live interactive zone which showcases latest devices, 5-seater wi-fi  zone delivering the fastest speed of up to 40Megabits per second and a document centre for scanning, printing and laminating.

He said the café was just the first of similar shops earmarked for other parts of the country, adding that the next one would be on the KNUST campus in Kumasi.

Mr. Adjei said the uniqueness of the café was that it had Africa’s highest internet speed and also offered internet experiences on Wi-Fi, dongles and Vodafone’s newly introduced Mi-Fi.

“This is clearly a show of our commitment to being the most innovative telecom operator in the country and give power to the customers to have a great experience browsing the internet for fun, business and academic work,” he said.

Some journalists took advantage to try the various services available at the café. 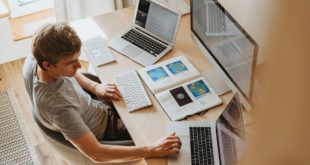 The face of business seems to be changing all the time. Right now, the extensive …