The Ghana Investment Fund for Electronic Communications (GIFEC) says it plans to build 90 more telecommunications towers by the end of 2012.

These towers will be situated mostly in the rural areas where the telecommunications companies don’t want to erect masts.

“We intend building 90 more towers especially in the rural communities by the end of 2012”, Mr Kwame Bedu-Andor, the Communications Manager of GIFEC told ghanabusinessnews.com on the sidelines of the recently held Ghana Policy Fair on April 29, 2011.

“These are telephone masts/towers which are provided by GIFEC at underserved and unserved communities for the provision of telecommunications services. The sites are available for co-location by telecommunications companies and other interested parties”, a fact sheet from GIFEC indicates.

He said that when the project is completed, licensed telecommunications companies would be asked to launch their services for a fee and it will help them to provide good network services to the community.

Meanwhile, the outfit said it intends to provide 8000 rural payphones to underserved communities between 2011-2012. So far 1000 payphones have been deployed.

GIFEC is largely funded by licensed telecom operators, government and investment made by the Fund’s Trustees. 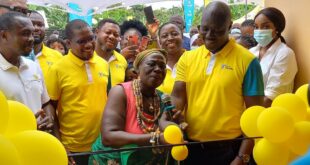