October 16, 2010 General News Comments Off on ADM Cocoa Processing urged to venture into production of other raw materials

The Vice President, Mr John Dramani Mahama, has urged the management of the Archer Daniels Midland (ADM) Cocoa Processing Factory, in Kumasi, to expand its operations, by pioneering into the production of other raw materials, such as palm nuts, shea nuts, cashew, soya beans and groundnuts.

This, he said, could greatly reduce the rural-urban drift, since the demand for those raw materials could stimulate growth in the rural areas, and also provide jobs to the teeming unemployed youth.

Mr Mahama said this in a speech read for him by Alhaji Collins Dauda, Minister for Lands and Forestry, at the First Anniversary of the official opening of the ADM Cocoa Processing Factory at Kaase, in Kumasi, on Friday.

He said it was the intention of the government to provide additional incentives to companies that were engaged in tertiary processing of cocoa, to produce chocolate and confectionary products for exports and local consumption.

The Vice President said the economy has started to show signs of positive growth and attributed this to the sound economic policies of the government.

Mr Mahama said one year’s operation of the company has helped in providing job security for many Ghanaians and hoped that a lot of them would be employed as the company intended to expand its operations in the years ahead.

He lauded the company for not only being a good employer, but also a responsible corporate citizen to the people of the Kaase community, by ensuring improved sanitation to the
people in the form of modern bath houses and toilets.

The Vice President was also appreciative of the company’s contribution to the Otumfuo’s Charity Foundation to assist needy and brilliant students, to pursue courses

Mr Mahama said government was taking a serious view to address some of the challenges, such as the lack of raw material of coca beans facing the company to boost its production,

Mr Mouhamoudu Kane, General Manager of ADM Cocoa West Africa, said the company has seen a remarkable achievement in its one year operation in the country.

He said as part of the company’s social responsibility, several community projects including the construction of toilets and baths houses had been provided to the people of Kaase to help improve their sanitation as well as sensitize them on HIV/AIDS, Tuberculosis and Malaria Awareness programmes.

Mr Kane expressed the hope that the relationship between the management and workers would be strengthened to improve the performances of the company in the years ahead. 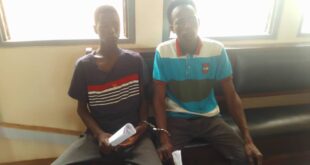