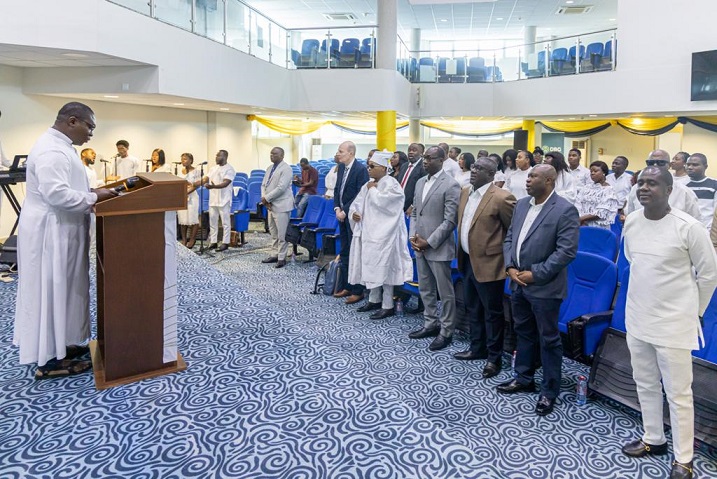 Development Bank Ghana has commemorated its first anniversary with a thanksgiving service and a call on its partners and staff to continue to work together for greater success after its foundation-building first year.

The non-denominational service, which was held last Friday, 11 November 2022, marked exactly one year since the new development bank received its banking licence from the Bank of Ghana.

It was attended by the leadership and staff of the Bank, Managing Directors and other representatives of their partner institutions including Kreditanstalt Für Wiederaufbau (KfW), Consolidated Bank Ghana (CBG), CalBank, Access Bank, Ghana Incentive-based Risk-sharing System for Agricultural Lending (GIRSAL), Association of Ghana Industries (AGI) and Fidelity Bank.

Preaching the sermon, the Rt. Rev. Fr. Anthony Afriyie-Amponsah, of the University of Ghana shared a message on the need for each member of staff to contribute significantly towards the Bank’s goal.

He called for teamwork, discipline and appreciation for the efforts made and results achieved by staff. He challenged the staff and the Bank’s partners to work together in unity, focused on delivering DBG’s agenda and prayed for God’s guidance for the Bank’s leadership.

According to its laid-out agenda, DBG’s first year has been devoted to building the required foundation for effectively undertaking its mandate of playing the role of a catalyst for the growth of the private sector, specifically Small and Medium Enterprises (SMEs).

This, the Bank has successfully achieved by establishing the relevant governance structures internally, forming partnerships with several financial and non-financial institutions and releasing GHS245 million through its partners for the funding of SMEs. In collaboration with its partners, it has also organised capacity building workshops for stakeholders in the SME sector. All these being key targets for its first year which have been achieved.

Addressing the congregation during the thanksgiving service, DBG’s Chief Executive Officer, Mr. Kwamina Duker, called on all staff and partners to work together to win together.

He thanked the partners for their support and commitment and urged them to continue to deliver the same in the years ahead.

He also congratulated the staff of DBG for a successful first year and stressed the need to continue to work efficiently together, adding that the DBG was introduced during difficult times however it was exactly for such challenging times that a catalyst for growth is needed.

He explained that the Bank has, despite the challenging environment, put in place a solid foundation in its first year on the back of which it will be rolling out more partnerships with SME-focused institutions and a lending programme which also includes technical support.

He concluded by saying that “we are filled with hope and positivity for the years ahead but once again I would like to say that success can only be possible if we work together and remain committed to doing it differently. Let us win together with God on our side.”

DBG acts as an enabler for businesses in Ghana and as a long-term capital provider in the market. DBG’s mission is to foster strong partnerships to finance economic growth, create jobs and build capacity for SMEs and to provide long-term financing and de-risking services, underpinned by technology and evidence-based research/insights.

It also includes attracting, developing and retaining exceptional people and operating as an independent, financially sustainable world-class institution. DBG aims to promote Environment Social and Governance (ESG) excellence within the businesses the Bank supports. The Bank has received funds from the World Bank, European Investment Bank, Kreditanstalt Für Wiederaufbau (KfW) and the African Development Bank. DBG is a signatory to the UN Global Compact.