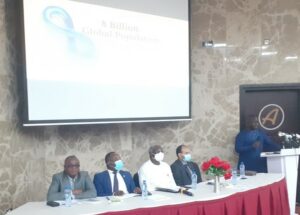 Mr Yisa stated that providing every person with access to safe and voluntary family planning was one of the best investments to be made by countries, including Ghana.

He said this on Tuesday in a speech read on his behalf at a ceremony to welcome the 8 billionth baby born at the Ridge Hospital in Accra.

The global population, according to the United Nations, is projected to reach 8 billion today, November 15, 2022.

The ceremony was held in collaboration with the Ghana Statistical Service, the National Population Council, the National Development Planning Commission, and the Regional Institute for Population Studies, with support from the UNFPA.

The 2014 Ghana Demographic and Health Survey reveals that the total prevalence of unintended pregnancy among pregnant women is 40 per cent.

Also, 29.9 per cent of women who do not want to become pregnant but are not using modern contraception are among the highest percentage of adolescents aged 15-19.

He said hopefully, Ghana would reduce its maternal mortality ratio to 70 deaths by 2030, stressing that upscaling contraceptives contributed to the reduction in poverty and enabled young people, especially girls to complete their education.

Mr Yisa said estimates showed that the long-term socio-economic benefits of achieving universal access to quality sexual and reproductive health services would yield on the investments made in family planning.

He said UNFPA had supported Ghana and other countries to understand population dynamics and changing demographics to project the future.

“UNFPA supports the development of policies and programmes that promote healthy and inclusive societies, with a focus on ensuring rights and choices for all,” he said.

He stated that UNFPA would continue to work with the Government to enable it to realise the full potential of the citizenry and ensure a healthy population.

Prof Samuel Annim, the Government Statistician, emphasised the importance of quality data for effective planning, saying “the GSS is driving Ghana to a statistic-driven economy”.

He said Ghana’s population of 30.8 million in 2021 census, suggested that the country’s population had increased almost fivefold since 1960 in a period of 61 years.

The figure, he stated, meant that efforts must be made to ensure a greater work force and a capacity to produce goods, wealth, and services for the country’s growth and development.

Prof Ayaga Bawah, the Director, Regional Institute for Population Studies, University of Ghana, said the Institute would soon launch a book titled “Ghana’s Demography: Evolution and Implications for Development,” as part of the Institute’s 50th anniversary.

He said the book, which was planned to be published periodically, would focus on demographic issues related to Ghana’s development.

Ofori-Atta to respond to Minority’s grounds for censure on Friday, November 18