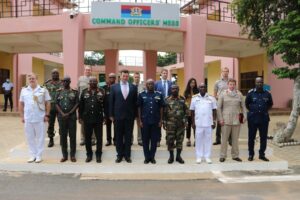 Mr James Heappey, the United Kingdom (UK) Minister for Armed Forces, has arrived in Ghana as part of a three-country visit to West Africa.

A statement issued by the British High Commission and copied to the Ghana News Agency said the Minister would visit both Accra and Tamale in Ghana and then travel to Togo and the Ivory Coast.

It said the Minister’s time in West Africa highlighted the UK’s commitment to the enduring defence and security partnership with the region.

The statement noted that Mr Heappey arrived in Ghana as leaders from across the Commonwealth came together in Kigali, Rwanda for the Commonwealth Heads of Government Meeting, including UK Prime Minister Boris Johnson.

It said the UK would now hand over as Chair-in-Office to Rwanda.

It said as Chair-in-Office, the UK delivered more than £500 million of projects and programmes in support of a fairer, prosperous, more sustainable and more secure future.

Speaking after he arrived in Ghana, Mr Heappey said: “The UK has a firmly global outlook and we recognise that settled security comes from mutual support and commitment.

“During my engagements here, I will update trusted partners on what the UK is doing and what more we might do to co-operate and tackle shared threats to our security and prosperity.”

The statement said during his visit to Accra, the Minister awarded Lt Commander Priscilla Ami Dogbeda Dzokoto the Dartmouth medal for completing her initial naval training at the Britannia Royal Naval College in Dartmouth in the UK in 2013.

It said the Minister joined a discussion about the Accra Initiative in the country’s capital and visited the Multinational Maritime Coordination Centre (MMCC) Zone F at Christiansborg Castle.

The statement said three of the UK’s Chevening Alumni had lunch with the Minister, where they talked about their Chevening journey and shared their experience of the latest ‘See Something, Say Something’ campaign in Tamale.

It said throughout his visit to West Africa, Mr Heappey was accompanied by the UK’s new Defence Adviser to Ghana, and non-resident Defence Attaché to Benin, the Ivory Coast and Togo, Commander Richard Walters.

Speaking during the Minister’s visit Commander Walters said: “Fantastic to have the UK’s Minister for Armed Forces with us in West Africa this week.

“This clearly marks the importance and strength of the UK’s defence partnership with the region.

“I am proud that Minister Heappey has had the opportunity to visit Tamale and see the UK-Ghana security partnership in action.”

The statement said since Mr Heappey’s last visit to Ghana in 2021, the UK-Ghana security partnership had seen HMS Trent (Royal Navy ship) visit Ghana for the first time, and would return later this year.

Others are British military support to Ghana’s National Security Exercise HOMESHIELD; and the agreement of a successful deal that would see 70 armoured Husky vehicles deployed to Northern Ghana to ensure the safety of vulnerable communities.

The statement said leaving Ghana, Mr Heappey reaffirmed the UK’s ongoing commitment to Ghana’s long-term security and prosperity, emphasising the importance of working together on projects and deployments in the country, across the region and on the global stage.