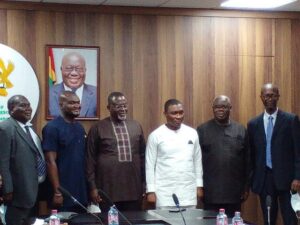 A seven-member governing board of the Precious Minerals Marketing Company Limited (PMMC) has been inaugurated with a charge to halt gold smuggling and leverage on collecting withholding taxes for the Government.

Mr George Mireku Duker, a Deputy Minister in charge of Mines at the Lands and Natural Resources Ministry, administered the Oaths of Office, Allegiance and Secrecy to the Board members in Accra on Tuesday.

He asked them to collaborate with the Bank of Ghana (BoG) towards the collection of withholding taxes and making the latter’s vision of buying gold to bolster the country’s currency a success.

Mr Mireku pledged the Government’s support towards reforming the PMMC and making it more profitable.

Mr Kinston Akomeng Kissi, the Board Chairman and a former Member of Parliament for Akwatia, in his acceptance remarks, thanked the President for the confidence reposed in them and pledged to work hard to make the Company economically viable and profitable.

He noted that with the country producing more than 100 kilogrammes of gold daily, which translated to $5 million, the country should not suffer any foreign currency shortfalls.

He bemoaned the frequent shortfall of the cedi to international trading currencies and expressed the belief that with the right policy interventions, the Ghanaian currency would be strong to withstand any external shocks.