The African Brother International Band, led by Nana Kwame Ampadu is set to mark its golden jubilee with a concert bash at the National Theatre, in Accra on December 13, 2013.

“It is going to be a big bash. The band will play old tunes that would send audience to back into memory lanes 50 years on.  The journey will begin in 1963 at Adabraka in Accra and into the nook and cranny of Ghana and the shores beyond.

“On December 13, I will light and make the National Theatre glow with the release of four new songs, in addition to some of the popular and evergreen songs, “Nana Ampadu, the songster turned Evangelist, said at the launching of the celebration in Accra on Wednesday.

“I’m not too old to sing, I’m gingered by the beat of the guitar,” the Ghana King of Highlife Music said, with a strong belief that the four new songs will “remold” Ghana.  I beg God to help me achieve that.”

He said there would also be fund raising in aid of the Akropong School for the Blind and some physically challenged school children in the Kwahu area of the Eastern Region.

Nana Ampadu called on musicians to be more decent in their lyrics.

adb to collaborate with Development Bank on its agribusiness financing agenda 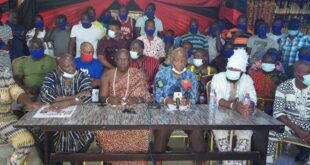 Mr Ken Ofori-Atta, the Minister of Finance, says the establishment of the Development Bank Ghana …